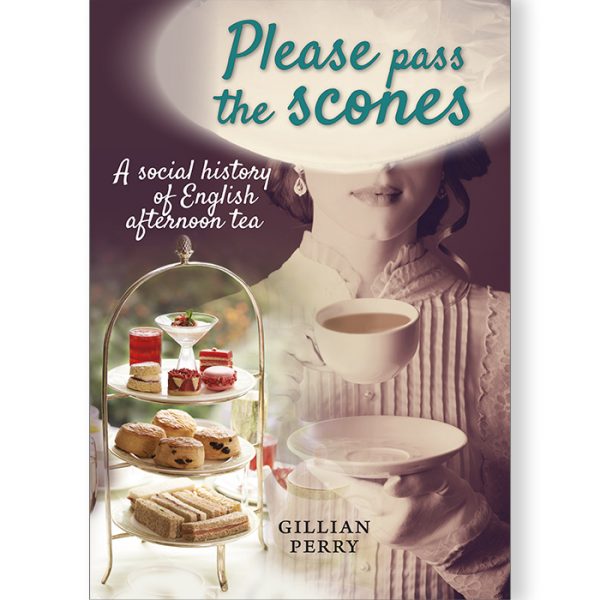 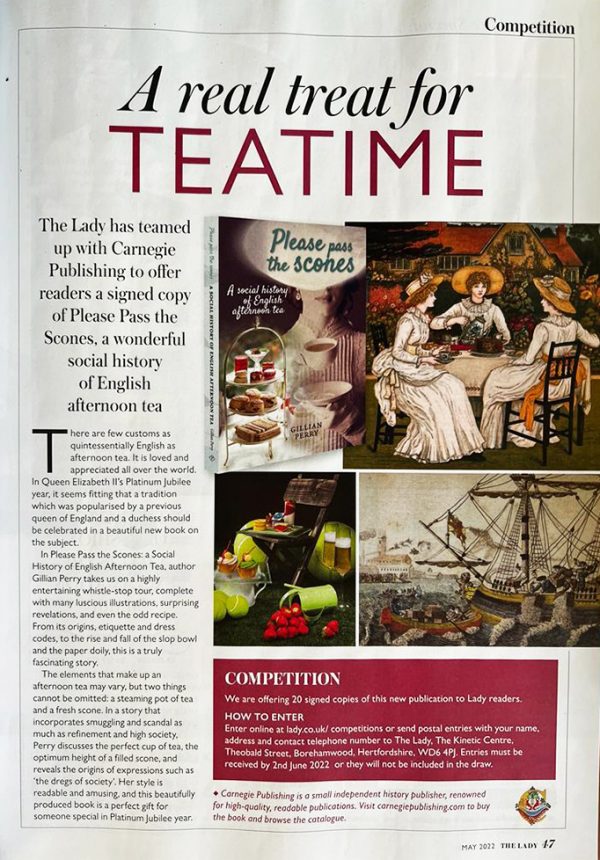 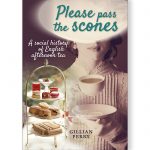 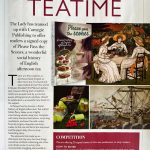 As seen in The Lady magazine.

Gillian Perry provides a lively and fascinating overview of the English afternoon tea, covering a range of topics from its origins to the perennial question of ‘jam or cream first?’. A scrumptious purchase for anyone who enjoys a good afternoon tea.

There are few customs as quintessentially English as afternoon tea. From being the preserve of the privileged classes, to the universally enjoyed and infinitely varied occasion that it is today, afternoon tea is loved and appreciated all over the world. In Queen Elizabeth II’s Platinum Jubilee year, it seems fitting that a tradition which was popularised by a previous queen of England and a duchess should be celebrated with the publication of a wonderful new book on the subject.

In Please pass the scones: a social history of English afternoon tea, social historian and author Gillian Perry takes us on a highly entertaining whistle-stop tour, enhanced by many luscious illustrations to make you salivate, and to bring forth your own wonderful memories. The book covers many aspects of the afternoon tea story, including its origins, etiquette, dress codes, and the rise and fall of once-essential tea table features such as the slop bowl and the paper doily.

The precise elements that make up an afternoon tea may vary – fine crockery, silver spoons, a traditional three-tiered cake stand or a thoroughly modern alternative, delicate sandwiches, party themes, miniature sweets, fizz. But there are two things that cannot be omitted: a steaming pot of the flavoursome liquid that all the delicious edible treats pivot around, and a fresh, scrumptious scone.

How do you make the optimum cup of tea?

What height should the perfect filled scone be, and is it jam or cream first?

What is the tea-related origin of the expression ‘the dregs of society’?

Why were tea gowns frowned upon in Victorian society?

Gillian Perry answers these and hundreds of other questions in a story that involves smuggling and scandal as much as refinement and high society. Her style is readable, amusing and informative, in this beautifully produced, unique book that will be a perfect gift for someone special in Platinum Jubilee year.

2 reviews for Please pass the scones: a social history of English afternoon tea