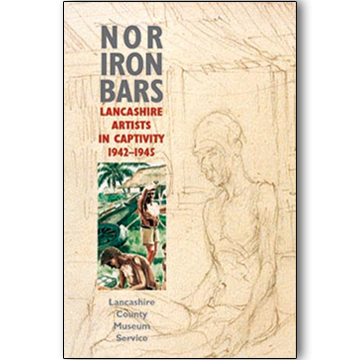 With the help of old comrades, other museums, and collectors, Lancashire County Museums has published Nor Iron Bars to mark the sixtieth anniversary of the end of the Second World War, and to pay tribute to the remarkable contribution made by Lancashire veterans.

During the bloody war in the Far East many thousands of Allied troops fell into the hands of the Japanese. Prime Minister Tojo promised that none would be pampered, and so with 16,000 perishing on the Burma-Thailand Railway alone. Yet the story of the PoW is also one of resilience and creativity in adversity. Among the Lancashire men who were captured were a surprising number of gifted artists, who set out to prove that walls do not a prison make, nor iron bars a cage. Despite a woeful lack of materials, they created a permanent record of the realities of daily life in the camps, revealing through their work just how resourceful and indomitable the human spirit can be.

Be the first to review “Nor Iron Bars: Lancashire Artists in Captivity 1942-1945” Cancel reply