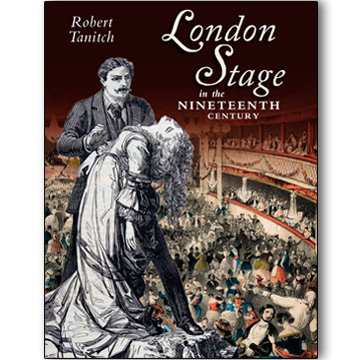 London Stage in the Nineteenth Century

This book fills a large gap: no other book conveys the essence of the age with such authenticity and wit. It is a unique record decade by decade, year by year, of all the major new plays, revivals, performances and productions.

The book contains over 220 contemporary illustrations of actors, productions, theatre buildings and playbills. All of these help to capture an era in which the public wanted the histrionic and the sensational; erupting volcanoes, burning buildings, historical tableaux, and even a presentation of Henley Regatta, complete with real boats and 200 tons of water.

There was a wide variety of entertainment on offer. There were melodramas, comedies, farces, pantomimes and extravaganzas by J. R. Planché, burlettas, operas, ballets, musicals and music halls. There were regular adaptations of novels, most notably those by Sir Walter Scott and Charles Dickens, and numerous adaptations and plagiarisms from the French dramatists. Plays based on recent murders and plays dealing with topical social issues. There were also patriotic pageants, aquatic dramas, equestrian dramas, canine dramas, and even elephant dramas.

This is a book that theatre lovers everywhere will enjoy: flicking through the lavishly illustrated pages will reveal many great personalities, performances and productions, but also witty commentaries, acerbic reviews and astonishing facts about all aspects of the London stage.

1 review for London Stage in the Nineteenth Century