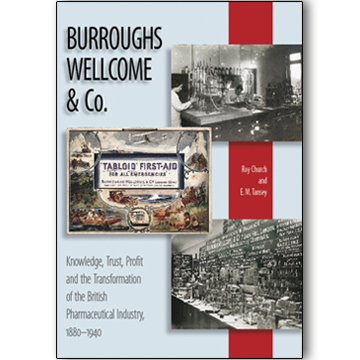 Knowledge, Trust, Profit and the Transformation of the British Pharmaceutical Industry, 1880-1940

A history of Burroughs Wellcome & Co., the largest manufacturer of pharmaceuticals in Britain and the most significant company in this sector before the Second World War.

Rarely in modern British history has a medium-sized company exercised such a dominant influence on an individual industry as did Burroughs Wellcome & Co. It was the largest manufacturer of pharmaceuticals in Britain, and the most significant company in this sector before the Second World War. Part of its commercial success was based upon its use of innovative marketing methods, such as product development, branding, advertising, salesmanship, market research, and resale price maintenance (of which Burroughs Wellcome was a pioneer as early as the 1880s).

Perhaps more importantly the company’s pre-eminence and influence lay in its extensive promotion of scientific research: through a series of research laboratories established by the company in the 1890s – unprecedented in the industry – remarkable scientific advances were made which won the company unique prestige, and established an unrivalled reputation and level of trust, especially among the medical community which used and recommended its products. Of particular importance was Henry Wellcome’s success in achieving registration for the laboratories under the Cruelty to Animals Act, which allowed staff to perform animal experiments from the beginning of the twentieth century onwards.

There was always significant tension between marketing for commercial profit on the one hand, and the advancement of medical research on the other. This tension intensified as the company’s relative position in the industry diminished. Before 1914 the strong relationship of trust between the firm and its consumers and clients had been a central factor the company’s success. Thereafter the erosion of trust between managers and scientists who were pursuing sometimes conflicting priorities – and between managers in overseas subsidiary companies and London – is central to understanding the company’s difficulties from the 1920s onwards, and represents a continuing problem in the pharmaceutical industry.