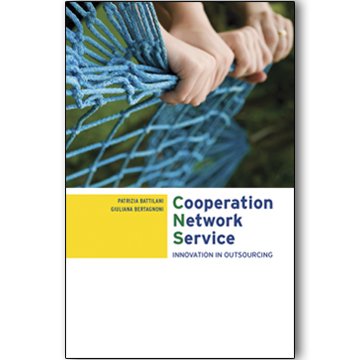 This book presents the results of an historical study designed to reveal the reasons for the remarkable recent success of cooperation in Italy’s service sector. The study focuses on the thirty-year history of the National Consortium of Service Cooperatives (Consorzio Nazionale Servizi – CNS), a business organisation which, with its network of 231 cooperatives and an annual turnover of almost €500 million, is one of the top facility management groups in Italy.

During several distinct phases and periods of development, some consistent themes and features can be perceived in the history of CNS. Perhaps most importantly, CNS has provided a framework within which member cooperatives can thrive. A vertical network has grown up which offers central support, strategic direction and a measure of discipline to its members. Member cooperatives do not surrender their own decision-making or organisational independence, but they can avail themselves of the advantages of belonging to a broader support organisation, allowing them to concentrate on their own core activities. Cooperatives are bound together by their distinctive ‘cooperative character’ and their social values, which even their large sizes, complex structures and frenetic rhythms fail to erase. The aforesaid success is undoubtedly due in part to the continuity between the values of the ‘founding fathers’ and the current generation of cooperative managers, notwithstanding the generational gap that emerged as a result of the events of 1968. In fact, one main reason for the success of this model is its constant capacity to combine both business logic and cooperative ethics, with an injection of faith and of shared values which has helped overcome the identity crisis that for years overshadowed the entire Italian cooperative movement.

The authors provide a coherent analysis of CNS’s historical development, in the process providing important lessons for the future, not only in Italy but far beyond.

Patrizia Battilani is professor of Economic History at the University of Bologna. She sits on the Advisory Board of the Journal of Tourism History. She has published several books and essays mainly concerning the economic history of Italy, the history of tourism and the co-operative movement. Her latest publications include ‘Italy’s cooperatives from marginality to success: finance and networks’ (with Vera Zamagni), inForms of Enterprise in Twentieth-century Italy. Boundaries, Structures and Strategies, edited by A. Colli e M. Vasta, and ‘The Bel Paese and the transition to a service economy’, Journal of Modern Italian Studies, 2010.

Emanuele Felice is visiting professor of Economic History at the Autonomous University of Barcelona and research fellow at the University of Siena. He has made extensive research on Italy’s regional inequality, but has also published on business history and public policies, and more recently is working at the reconstruction of Italy’s national accounts. He has published several books and essays, among others, ‘State Ownership and International Competitiveness: the Italian Finmeccanica from Alfa Romeo to Aerospace and Defence’, in Enterprise and Society, 11 (2010) and ‘Regional Development: Reviewing the Italian Mosaic’, in Journal of Modern Italian Studies, 15 (2010).

Tito Menzani is research fellow at the Department of Economics at the University of Bologna, and in 2008 visiting fellow at London School of Economics. He works on different economic history topics, with a special attention to organisations that overlap business and social features, such as co-operative enterprises. He has published several books and essays, including ‘Cooperative Networks in the Italian Economy’, with V. Zamagni, in Enterprise and Society, n. 1, vol. 11, 2010.

Contents
Foreword, Ivano Barberini
Preface, Franco Amatori
Introduction, P.Battilani and G.Bertagnoni
1) Towards a service society, Patrizia Battilani
2) The strategies and development of CNS,Emanuele Felice
3 For good or bad: Aspects and problems of the CNS’s cooperative network, Tito Menzani
4) Work and values: The cooperatives of the new millennium, Giuliana Bertagnoni

Be the first to review “Cooperation Network Service” Cancel reply