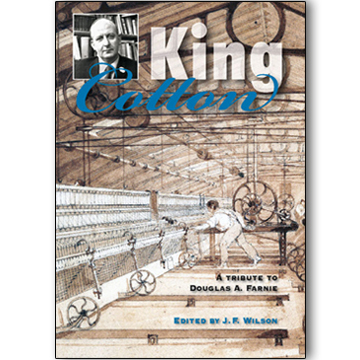 King Cotton: A tribute to Douglas A. Farnie

‘What would happen if no cotton was furnished [by the southern states of America] for three years? … England would topple headlong and carry the whole civilized world with … No, you dare not to make war on cotton … Cotton is King.’
So said Senator J. Hammond of South Carolina in 1858. Such was its reliance on Southern cotton, he reckoned, that Britain would have to side with the Confederates in the forthcoming American civil war. Fine speeches in Parliament in opposition to slavery was one matter; economic survival was quite another.

Raw cotton accounted for around 60% of America’s exports in the mid-nineteenth century. For five generations woven cotton cloth was Britain’s most important export product. Manchester was dubbed ‘Cottonopolis’. In Lancashire as well as in the southern states the term ‘King Cotton’ came to be used frequently as a metaphor for the towering dominance. The epicentre of what had been a radical way of working and of living. For here began the industrial revolution itself, with cotton mills bringing together hundreds of workers under one roof. Whole districts and towns sprang up around sites of water power and water transport to house them.

For Lancashire, cotton’s days of greatest, most dynamic growth came during the early part of Victoria’s reign; despite periodic downturns (and the Cotton Famine which Senator Hammond could not envisage the British ever allowing to happen), the industry continued to expand until its absolute peak in the years just before and after the First World War. 7,000 million English cotton cloths were exported in 1913.

It is entirely fitting that a group of Douglas’s ardent admirers should therefore contribute a series of essays on topics that he has shed light on in a highly distinguished career. Anyone who has ever come into contact with Professor Farnie will be aware of his knowledge of Lancashire’s industrial history. Specifically its greatest contribution to British wealth creation, the cotton textiles industry. His ability to produce either pertinent factual information or a reference to vital primary or secondary information has been a hallmark of the way in which he has supported fellow researchers, sharing his knowledge base as a means of generating fresh interpretations or projects.

This collection of essays is based on Professor Farnie’s extensive research interests in Lancashire and textiles history. All chapters are written specifically for this volume, as a tribute to Professor Farnie’s abiding contribution to these fields.

This collection accurately reflects the enormous contribution Douglas Farnie made to each of these subjects. Historians will consequently benefit enormously from reading this new material, given that it both extends our knowledge of Lancashire and textile history, and provokes fresh debates about issues that will never be laid to rest. This provides a fitting tribute to a man who relishes the search for knowledge creation as the driving force behind a life devoted to this pursuit.

Be the first to review “King Cotton: A tribute to Douglas A. Farnie” Cancel reply