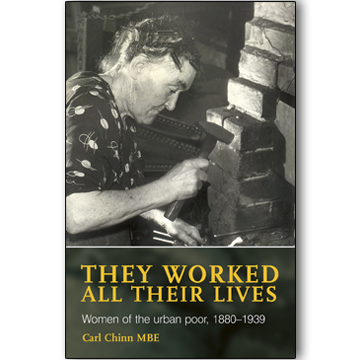 They Worked All Their Lives

Down-trodden … brow-beaten? Not in my family!

While an undergraduate Carl Chinn recalls a lecturer postulating that working-class women were downtrodden and brow-beaten by their men: ‘I remember thinking, “They’re not in my family … I lacked the confidence to disagree, and to tell him that I knew many working-class women who were at least the equals of their men and who could fight physically. Indeed the first fight I had seen was when I was ten. My Nan had taken me and my brother down the Villa. An away fan had pinched our kid’s scarf and our Nan, just four foot eleven tall, turned round and laid the chap out with one punch. A tough woman whose one fore-finger had been torn off by a machine at work, our Nan was the daughter, mother and grandmother of strong, working-class women.”

Women of the urban poor worked from when they were toddlers until they died. They worked inside and outside the house, cooking, washing, cleaning and simultaneously planning how to get by. Cleaning the clothes and houses of an arrogant middle class, condescending in their attitudes towards working-class women. They worked in factories, shops, mills and workshops. They worked in their neighbourhoods in providing vital services for their neighbours. The women of the urban poor worked all their lives for their families and neighbours. They deserve our respect and admiration.

Many of them were strong, independent, selfless and hard working. They also achieved their central role in the family by their dedication to its well being. Furthermore, this fidelity gained for them the devotion of their children, who recognised a mother’s command of the household finances, her ability to maintain a family’s self-sufficiency through careful housekeeping and creative cooking, and her valiant efforts to stay clean and respectable. Often earning her own income and also receiving the earnings of her children, it was the mother who was in charge of the daily battle against hunger and hardships.

Strong kinship ties and extended families in settled neighbourhoods was made the more pronounced by the desire of married daughters to live close to their mothers. Older married women who were grannies and aunts held sway over large kinship networks, and from this position of importance many of them also achieved status in their neighbourhoods as layers-out, unofficial midwives, wise women, custodians of the moral code and guardians of the group consciousness. Carl Chinn explains the immense importance which women of the urban poor had to their families and also to wider society.