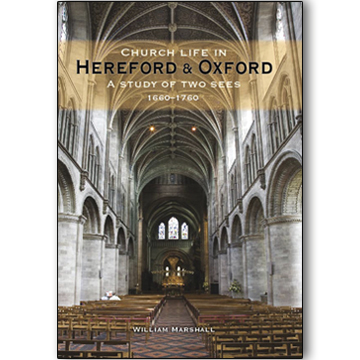 Church Life in Hereford and Oxford

A book that will be of great interest to secular and ecclesiastical historians alike, as well as providing masses of interesting information for local people.

In this significant book, William Marshall concludes that in these two contrasting sees the Church in the century after the civil wars was very much alive, and even vigorous. Its worst failings, he claims, were in the area of social welfare and in the tedious nature of its worship for the mass of the people. Despite this, there was much new building work and many competent, energetic bishops and officials. The Church was neither asleep nor decadent.

Hereford and Oxford in the century following the Restoration were two widely contrasting sees. Hereford was old, dating from ad 676, and large, sprawling over Herefordshire, half of Shropshire and small parts of other border counties. The Oxford diocese, on the other hand, dated from just 1542 and was compact, merely covering the county of Oxfordshire.

This interesting book concerns a much-overlooked period in history, drawing on little-known original sources to build a picture of the administration of these disparate dioceses.

There are fascinating insights into the working of the church courts (which controlled people’s lives in a way and to an extent that would be unacceptable today), portrayals of the key figures in both sees, and an analysis of diocesan patterns of welfare and education provision. William Marshall’s research also reveals that there was a strong commitment to repair – or to build new – places of worship, and to make good the damage caused to Church infrastructure during the civil wars of the 1640s.

The closing chapters go on to examine the work of the bishops, their social origins, their academic standards, their efficiency and diligence. As a group, they certainly cut a more energetic and conscientious figure than has often been supposed, and for the most part, the author argues, they were competent men who saw and acknowledged the weaknesses of the Church and sought to address them.

In a departure from commonly held wisdom, what emerges from William Marshall’s research is that in many places the Church at the time was very much alive, and even vigorous. Its worst failings were, he claims, in its social welfare and in the tedium of its worship for the mass of the people, but here, at this time, it was certainly neither asleep nor decadent.

William Marshall read History at Pembroke College, Oxford, and later worked for his M.Litt. and Ph.D. degrees at Bristol University. He was Head of History at Millfield School, Somerset, and one of the ordained chaplains. After retirement he worked as a voluntary Project Manager for the GAP organisation in China (1990–95) and West China (1995–99), sending young people to teach English in widespread places in that vast country and overseeing their work there.

He lives in Cambridgeshire with his wife. They have three sons and two granddaughters.