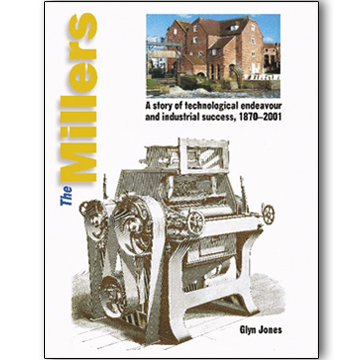 A Story of Technological Endeavour and Industrial Success, 1870 – 2001

A clear and lively account of the machinery, innovation and personalities that have shaped the industry that provides the all-essential daily bread. Indispensible for anyone with an interest in industrial history. There is a wealth of literature on the traditional flour milling industry, much of it concerned with the charms of rural settings and ancient crafts, whereas the history of the dramatic changes in milling methods from the 1870s onwards has been somewhat neglected.

The innovations were revolutionary. Roller mills, purifiers and a variety of sifting and sorting machines replacing millstones and crude sieving equipment. Change was propelled by an increasing demand for white bread, and whiter flour could be produced by roller milling of hard foreign wheats, whereas traditional millstone methods were not suitable for the production of large quantities of branless flour. Henry Simon, who became the pioneering leader of the new field of milling engineering, installed his first roller plant in Manchester in 1878; by 1887 mills on the Simon system could produce enough flour to meet the requirements of 11 million people. The mass production of flour for our daily bread began in earnest. From 1904, the most forceful innovator among British millers was Joseph Rank. He commissioned Henry Simon Ltd to supply new plants at the main ports of Hull, London, Cardiff and Liverpool.

Despite the hugely impressive and far-reaching technological advances made by British millers and milling engineers, they have not received the credit they deserve. They replaced the traditional, basic form of the industry rapidly and effectively. Their inventions transformed milling in Britain. The Millers describes, in a clear and lively way, not only the changes in machinery and processing and the effects on the traditional industry, but also the personalities who shaped the trade and the companies they ran. Modern mills, rooted in British innovation and enterprise, are impressive in appearance and striking inside. The smart, automatically controlled machinery processes wheat for a range of attractive food.

Be the first to review “The Millers” Cancel reply