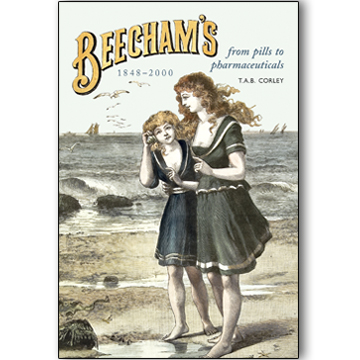 Beecham’s: from pills to pharmaceuticals

This lively and thoroughly researched book traces Beecham’s progress from home-made pills to the most advanced antibiotics. Early chapters describe, in a readable and engaging style, a number of colourful and turbulent episodes involving the talented but wayward founding family.

The world’s most famous recuperative pills were the invention of Thomas Beecham, one-time Oxfordshire shepherd who started mixing aloes and ginger in a small Wigan shop in 1848. This fascinating book takes the story of Beechams, warts and all, from those early days right through to the company’s modern incarnation at the heart of the British pharmaceutical industry.

At the age of 28 a poorly educated but resourceful Oxfordshire shepherd took the historic step of moving 200 miles north to Lancashire in order to attempt a new career making and selling medicinal pills. Thomas Beecham already had a passing interest in pharmacy and for many years had concocted remedies for the farm animals under his care, but even he could not have believed that the firm he began with faltering steps would endure and prosper into the twenty-first century. Mr Beecham’s ‘Patent Pills’ found a ready market in the North West and beyond. Beecham took care to ensure the consistency and quality of his machine-made products and from an early date marketed them vigorously. When Thomas retired in 1895, Beecham’s Pills were easily the best-selling patent medicines in the country.

The Beecham family ceased to own or control the firm just after the First World War following a disastrous land deal in London pursued by Thomas’s son Joseph. But the pill-making continued to make good profits and despite the family’s affairs being tied up in the Court of Chancery for several years after Joseph’s death, and the near-bankruptcy of his musically brilliant son (Sir) Thomas Beecham, there was easily enough value in the St Helens firm to see it transformed during the 1920s from family firm to a professionally managed joint-stock venture. In the 1930s the company grew by acquiring brands such as Macleans toothpaste, Eno’s, Brylcreem and Lucozade.

Later it tentatively began to experiment in the new – and potentially very lucrative – area of penicillins and pharmaceuticals, a crucial change of direction that culminated in the series of company takeovers which eventually saw the Beecham brand name disappear within the Anglo-American GlaxoSmithKline in 2000. Manufacture of Thomas Beecham’s famous pills had ceased just two years earlier.

This lively and thoroughly researched book traces Beecham’s progress from home-made pills to the most advanced antibiotics. Early chapters describe, in a readable and engaging style, a number of colourful and turbulent episodes involving the talented but wayward founding family.

Musical enthusiasts will welcome new background detail about Sir Thomas Beecham, while business historians, management specialists and economists are given an authoritative account of how a modest firm managed to survive and prosper over a century and a half. Many others will just enjoy a good read.

Be the first to review “Beecham’s: from pills to pharmaceuticals” Cancel reply