Skip to main content
Close Search
View basket “The History of Preston Guild” has been added to your basket. 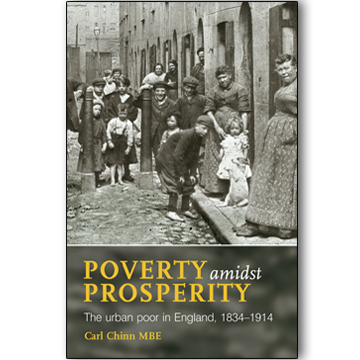 This book is the ideal introduction to those seeking to understand poverty from the grassroots. Its wide range of evidence, clear analysis and strong argument stress the importance of communities and give a voice to those whom traditional history has marginalised.

See also They Worked All their Lives: Women of the Urban Poor by Carl Chinn. An excellent companion volume.

Confidence marked the upper and middle classes of Victorian England: they boasted that the sun never set on their Empire; believed they were destined to lead other nations; bragged about the pre-eminence of their civilisation. They lived in a country that had become rich through industrialisation. But amidst great prosperity there was also much poverty. Deprivation and distress were widespread and obvious. Poor dwellings later known as ‘slums’ surrounded towns and cities. The poor crowded into these insanitary districts; they rented badly built dwellings with inadequate facilities; did the dirtiest, hardest and most dangerous jobs; ate the worst food; suffered ill health and early deaths.

Many observers stated that people did not wish to raise themselves out of the mire, hence causing the muckiness of the poor districts. Gradually, however, social investigators argued that individuals and families had little or no control over economic conditions which resulted in poverty.

Poverty amidst Prosperity focuses on the urban poor themselves, and explains their way of life from within. Using working-class autobiographies and other evidence from working-class people themselves, Carl Chinn shows how people reacted to poverty, and brings to the fore their strategies for coping with their situation. He highlights the way in which poorer people forged strong neighbourhoods through the powerful links of neighbourliness, extended family networks and ‘matrilocality’, links which were strengthened by crucial facilities such as corner shops and local shopping thoroughfares.

Places like The Nichol in London, Hope Street in Salford and Summer Lane in Birmingham have their dignity restored. Despised by so many as a lesser race living in the slum or abyss, the urban poor are revealed to be hard-working, resourceful, supportive of each other, dogged, determined and imbued with the belief that sharing and helping out were the right things to do. The urban poor were not passive victims of external circumstances; they fought back against poverty and their dreadful urban environment.

Infused with a sense of social justice and deeply affected by Carl Chinn’s own background. The families of both his mother and father come from tough working-class streets in Birmingham marked by their ties of kinship and neighbourliness as much as by their bad housing and inadequate sanitation.

Be the first to review “Poverty amidst Prosperity” Cancel reply