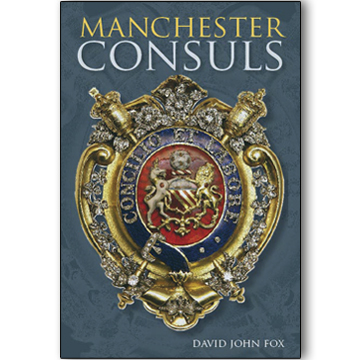 In this important book, David John Fox, himself a serving consul for Chile, charts the fascinating, varied and, to many Mancunians, perhaps surprising role which these consuls and their missions have played in the wider history of the region.

Manchester has the largest and most active consular corps in the country outside London. This book represents the first ever detailed history of consuls and their activities for any region of the United Kingdom. They look after the interests of foreign powers. The first appointments in Manchester coincide with its emergence as the first city of the Industrial Revolution, the financial and commercial hub of northern England.

Virtually every country in the world, from Argentina to the former Yugoslavia, from the Ivory Coast to the Sandwich Islands, has provided consuls based in Manchester: no fewer than about 800 have served in Manchester over the last 200 years. Some have been honorary consuls, others career diplomats; some have been nationals of the country they represent, others have been British, most with a personal association with the state they serve. Their responsibilities and privileges vary widely, and many have played a significant role in the life of the region. The new international context of a shrinking world gives the present role of consuls an increasing importance.

Be the first to review “Manchester Consuls” Cancel reply