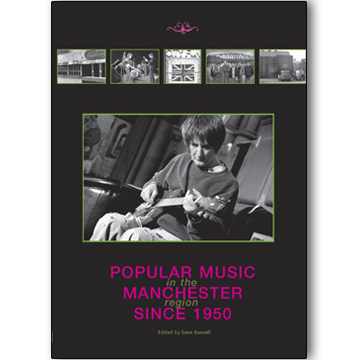 Popular Music in the Manchester Region Since 1950

An intriguing collection of essays and a great read for anyone interested in the history of pop music and the region.

Manchester was ‘at the heart of English pop music creativity for at least three decades’. While Merseyside and London were clearly key players, in the second half of the 20th century Manchester’s music scene attained a striking national and international profile. From the ‘beat’ boom of 1963-5, moving on respectively to Northern Soul at its early 1970s zenith, the moment of punk in 1976, post-punk, the emergence of Factory Records and its associated institutions, and, finally, the arrival of Oasis and the flowering of Britpop in the mid-1990s, ‘Madchester’ was the epicenter. This fascinating book celebrates this contribution and delves into the music cultures and subcultures around the city during one of the most exciting eras in musical history.

‘Manchester cabaret clubs and popular music in the 1960s’

‘Audiences in punk and post-punk Manchester’

‘The auras of Factory Records in music, place, film & historiography’

‘The Manchester Lesbian and Gay Chorus; the Gay Village, and local music-making’

‘Digging (out) the beat: sources for the study of popular music in the Manchester region’