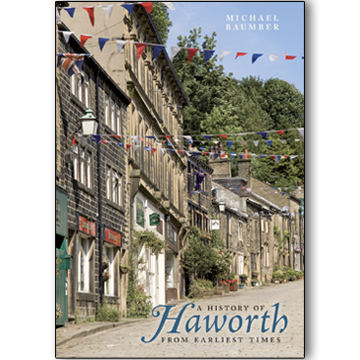 A History of Haworth from Earliest Times

The book is particularly strong on the textile industry, which became such a dominant force in the district’s economy, and was such an important and all-consuming fact of life in early Victorian Haworth. From exactly this period, of course, Haworth’s history is dominated by that of the Brontës, and the author skilfully weaves the two together, throwing important new light on both. Also covering the hamlets of Oxenhope and Stanbury, the book is fully illustrated, with many rare old photographs, and offers many insights into the village and also into its occasionally ambivalent relationship with its most famous literary residents.

One nineteenth-century literary family is forever linked inextricably to Haworth village and its parsonage. For it was here, in 1821, that Patrick Brontë, an Irish Anglican clergyman, came from Thornton to be curate. He brought his three young daughters and son, and the sisters grew up to become quite the most remarkable literary phenomenon of the century. As children in Haworth they knew the streets and the houses, the moors and the people.

Indeed, as this excellent book reveals, many of the characters in the Brontë novels were based upon real Haworth folk. Some recognised themselves and were not happy with their portrayal. The moors above the village figure prominently as the haunt of the brooding Heathcliff in Wuthering Heights.

Yet, as Michael Baumber’s highly readable A history of Haworth from earliest times shows, there is so much more to the story of Haworth. From the arrival to the area of the first settlers 15,000 years ago, the author narrates a long and fascinating history, through the Norman and medieval periods, on to the Civil Wars and the Industrial Revolution.

Michael Baumber was Head of History at Greenhead Grammar School, Keighley, from 1969 to 1987. He has previously published two books about Keighley and Haworth. He has also written a biography of Admiral Blake and is a contributor to the new Dictionary of National Biography and to the forthcoming Companion to Brontë Studies to be published by Cambridge University Press.