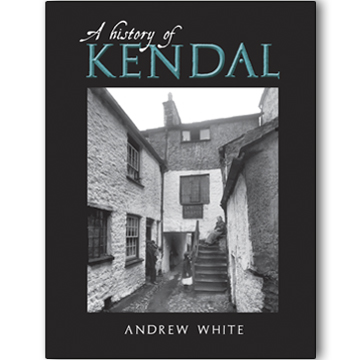 A History of Kendal

This book looks at Kendal’s origins; its two castles; the river Kent and its important bridges; and how the borough was created and the way in which it functioned. The history of the built environment is covered in chapters on shops and businesses and on houses, while the range of industries and the transport network that grew up to serve it, form the background to further studies. The book also considers religious history, health and education, food and entertainment, and the cultural and artistic life of the town. Life was often harsh—so we investigate the ups and downs of fortune as the town experienced fire, flood and the actions of hostile armies.

Kendal’s fame is disproportionate to its modest size: consider Kendal Mint Cake; Kendal Green cloth or Kendal as gateway to the Lake District. Do not let the modern obsession with tourism fool you. For centuries it was actually a down-to-earth workaday community that got on with its business regardless of Lakes poets and visitors. The town’s motto, Pannus mihi panis (‘cloth is bread to me’) says it all. It also had a very large rural hinterland, for which it was a service centre. It accumulated a good range of doctors, lawyers and banks in the process, as such places do.

The town has a number of myths, handed down with unwarranted veneration by successive historians. Such as that the Kendal yards were built as a defence against the Scots; that Queen Katherine Parr was born at Kendal Castle and spent her youth there; that a Flemish émigré in 1331 established the Kendal woollen industry; and that a notorious character called Dicky Doodle who carried the town’s first charter, given by King Richard I. These myths are debunked.

It’s story  is a narrative of hard work and comparative peace. There have been exceptions to both, of course, and its position on one of the main roads to Scotland means that the town has had a few shocks in its time. The phrase, ‘a hive of industry’ is often misused. However, in it’s case the tradition of getting on with things in your own way seems to have a long history. This is that history.

Be the first to review “A History of Kendal” Cancel reply