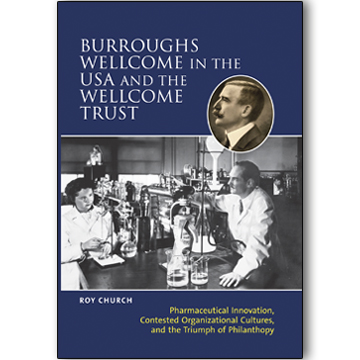 Burroughs Wellcome in the USA and the Wellcome Trust

This in-depth book explores how innovative drugs, sexual revolution, and merchant bankers were significant factors in explaining why and how the Wellcome Trust became the world’s third wealthiest charitable foundation.

Initially the Wellcome Trust’s income derived from the company whose scientists developed the first AIDS drug. Formed in New York in 1906 by the successful American pharmacist-entrepreneur, Henry Wellcome, Burroughs Wellcome & Co. was the American subsidiary of his wholly-owned, pioneering UK multinational pharmaceutical business established in London in 1880. On his death in 1936, ownership passed to the Trust in order to fulfil Wellcome’s wish to fund independent biomedical research to benefit mankind. Thereafter, the dysfunctional UK company failed to innovate and struggled to be profitable, whereas in the US, commercially adept managers directed resources into research, led by George Hitchings and Gertrude Elion. Their drug therapies for leukaemia, malaria, bacterial infections, gout, and organ transplantation culminated in a Nobel Prize in 1988. The research culture, inherited by their successors, contributed to further significant medical therapies, notably a treatment for herpes and, in an unprecedented collaboration with government bodies and Duke University, the first effective AIDS therapy.

This breakthrough in the government’s fight against the epidemic was followed by widespread vilification of the company over price and profit. There followed confrontation with the US government and direct action by protesters. Meanwhile, new trustees, experienced in business finance, espoused Wellcome’s philanthropic ambition and floated Wellcome plc. in 1986 to increase the Trust’s income and reduce exposure to risk, henceforward shared with multiple shareholders. The sale of the company to Glaxo in 1995 produced Glaxo Wellcome (subsequently GlaxoSmithKline). This secured the Trust’s independence, expanded net worth, and ensured enduring fulfilment of Wellcome’s aspiration through the activities of the Wellcome Trust and the Burroughs Wellcome Fund.