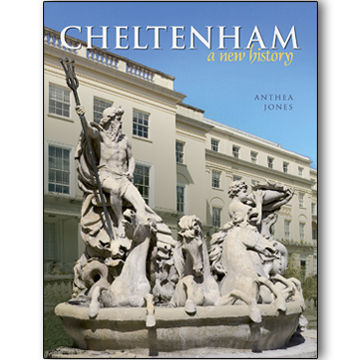 Cheltenham: A New History sets the town in its wider context. It describes the town’s physical development, its changing social mix and character over the centuries. It is illustrated with over 280 photographs and maps, most in colour. It also covers the outlying areas of Charlton Kings, Leckhampton, Prestbury and Swindon.

Cheltenham is well known as the most complete Regency town in Britain. It boasts a wonderful ensemble of broad streets, handsome terraces and sweeping crescents, as well as a remarkable number of generously proportioned squares and gardens. Grand stuccoed houses of the period are adorned with fine wrought-iron balconies, and the town has an air of openness, lightness and genteel early nineteenth-century affluence.

This period was certainly important in Cheltenham’s development, a time when the town became firmly established as a fashionable place of residence for the better-off, all the more attractive for being less expensive than nearby Bath.

Yet there is much more to Cheltenham than this. For hundreds of years it was a significant market town and trading centre for the surrounding agricultural area. This gave the town a major economic role within its region and also influenced its physical development over the centuries. Then in the eighteenth century Cheltenham’s pleasant location began to entice a number of affluent people to settle here, even before Henry Skillicorne inaugurated the Cheltenham spa on his land. Cheltenham’s waters were taken by many distinguished visitors including, most famously, King George III in the summer of 1788. Drinking the waters, it was hoped, might alleviate or cure the king’s periodic bouts of ‘madness’. The king spent several weeks in the town. He enjoyed his stay, and Cheltenham spa’s fame was secured. The transformation was profound. Cheltenham’s population increased tenfold in the first half of the nineteenth century, and the nature of the town changed radically, from market town to large, residential spa with a unique appeal.

In the twentieth century, Cheltenham changed yet again, as the council successfully spearheaded a campaign to bring business and industry to the area. Several organisations established their headquarters here, while the establishment of GCHQ was of considerable significance. Tourism and leisure, too, are crucially important. In March each year almost 250,000 come to watch the races, while festivals and the town’s other attractions draw in almost 2 million visitors each year.

Dr Anthea Jones was for fifteen years head of history at Cheltenham Ladies’ College. She read modern history at St Hugh’s College, Oxford, and then went to work in the London County Council, as it then existed. A few years later, teaching offered a more flexible working week, and quickly became a source of much enjoyment and fulfilment. An interest in local history was stimulated by attending WEA classes with Lionel Munby, and led to research for a Ph.D. that concentrated on social and demographic history. Her previous books are Tewkesbury, published in 1987, The Cotswolds, 1994, and A Thousand Years of the English Parish, which appeared in 2000; all were well received. Cheltenham: A New History builds on knowledge gained from these earlier studies, and on further extensive research in the archives. Dr Jones now lives in Charlton Kings.

Be the first to review “Cheltenham: A New History” Cancel reply