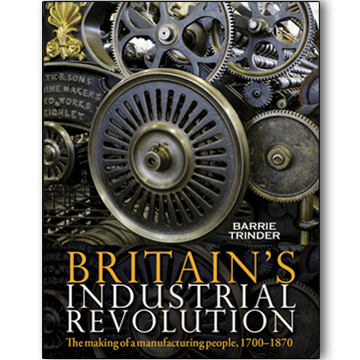 In this accessible, comprehensive, beautifully presented volume, renowned author, historian and teacher Barrie Trinder paints a graphic, true and above all human picture of a phenomenon of truly global importance: Britain’s Industrial Revolution.

The Industrial Revolution changed the world. The images we all share – of steam engines and locomotives, of smoke and smog, and of regiments of working men and women flooding out of factory gates at the end of their shifts – are so familiar that it is easy to forget just how momentous, profound and upsetting these innovations were at the time. This bold industrial age brought untold wealth and prosperity, but it could also be traumatic, dirty, dangerous and cruel.

New ways of living emerged. A flood of rural humanity poured into industrialising towns in search of work. Patterns of life became tied to those of the machine. Towns sprawled, production boomed, and British manufactured goods dominated world trade.

This important new book endeavours to explain the true nature of the Industrial Revolution in every part of the British Isles. Prominent, of course, are those districts which witnessed the greatest economic and social change, such as Manchester, Birmingham, the Ironbridge Gorge and Leeds. Yet it also shows how even the sleepiest of sleepy hollows could be affected by industrial development. The Industrial Revolution affected everyone.

This is no dry economic tone. It does not dwell on abstract theories about why the Industrial Revolution occurred in Britain before anywhere else. Instead, it focuses on the reality of what actually happened, where, when and how. Its authenticity comes from describing real people, places and experiences in every part of the country.

Barrie Trinder has gained an impressive depth and breadth of knowledge of the Industrial Revolution during a teaching career of more than forty years. For several years he lived in the Black Country, and spent four decades in Shropshire, during which time his research on Coalbrookdale and the Ironbridge Gorge won him international recognition.

He has written about many of the most celebrated sites of the Industrial Revolution period, and has contributed substantially to nomination documents for World Heritage designation for three of them. As an active member of TICCIH (The International Congress for the Conservation of the Industrial Heritage) and as editor of the Blackwell Encyclopedia of Industrial Archaeology, he became acquainted with industrial history in many European countries and in North America. As an urban historian he has studied towns throughout England and Wales.

During the last decade his published works have included studies of the probate inventories of people who lived in the Severn Gorge; the Upper Severn Navigation; the suburbs of Shrewsbury; twentieth-century industrial archaeology; and Victorian market-town lodging-houses. His career included fiffteen years at the Ironbridge Institute and five years at the University of Northampton. He is now a freelance writer and consultant and lives in Olney, Buckinghamshire.