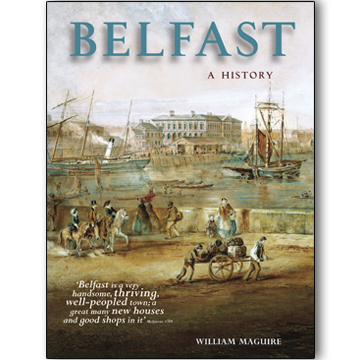 An intriguing history of Northern Ireland’s largest city. With a hard-won peace, investment and renewed hope, it is an excellent time to stand back and make a new assessment of the history that has brought Belfast to where it is today.

Understanding the past – where we have come from and what has moulded us – is important everywhere, and nowhere more so than in Northern Ireland’s largest city.

For 250 years Belfast, though quite unlike anywhere else in Ireland, was similar to many of the other great industrial cities of the United Kingdom. It embraced the industrial revolution wholeheartedly, and witnessed enormous economic success and expansion as a result. In its heyday it was a great port, a powerhouse of linen manufacturing, ship-building, and engineering, and a truly dominant force in the northern Irish economy. As the iconic shell of RMS Titanic was taking shape high above her Queen’s Island birthplace, Edwardian Belfast was near the peak of her economic might.

But within the city there developed patterns of community division and conflict – based on religion – which in their severity and seeming permanence have rendered it quite unique among the cities of the British Isles. From the seventeenth-century Ulster plantations to Catholic migration from elsewhere in Ireland, the particular mix of people in Belfast has always been different from everywhere else and has fundamentally shaped the city’s identity and history over successive centuries.

Much of the industry has now gone, and for many years the city had to struggle with the pain of adjustment, at the same time as it was being scarred by a generation of the Troubles.

Now, with a hard-won peace, investment and renewed hope, it is an excellent time to stand back and make a new assessment of the history that has brought Belfast to where it is today.

Historian William Maguire, who lived in Belfast for most of his life, succeeds here in painting an accurate, authentic and above all a balanced picture of the city, its events and its people.

W.A. Maguire graduated with a MA (Hons) in Medieval History and English Literature at St Andrews University, and later completed a Ph.D. at Queens University, Belfast. His early career was spent in teaching before being appointed Head of History at the Ulster Museum. He is a Fellow of the Royal Historical Society.

His Ph.D. thesis formed the basis for his highly acclaimed first book, The Downshire Estates in Ireland, 1801–1845 published by the Clarendon Press, Oxford. The Donegall estates were the subject of his next book, Living like a Lord, which was published in 1984, a second edition following in 2002. His research at the Ulster Museum has led to publications on the history of photography in Ireland and work on two exhibition projects; Kings in Conflict on the battle of the Boyne and Up in Arms on the rebellion of 1798. Since his retirement from the Ulster Museum his research concerned mainly the field of urban history.

2 reviews for Belfast: A History