Skip to main content
Close Search
View basket “Murder in Edwardian Merseyside” has been added to your basket.
OFFER 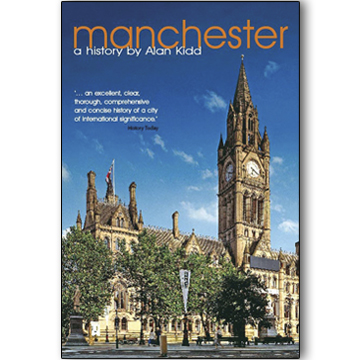 Every town and city has its story, but few have a history which belongs to the world. A process of phenomenal economic and industrial growth which began just over two centuries ago was to put this hitherto remote Lancashire town – ‘the greatest mere village in England’, as Defoe famously called it – on to the international map.

By the 1840s, over half a century of revolutionary change had made Manchester into the ‘shock city’ of the industrial age. It was the shock of the new which assaulted the senses and stimulated the imaginations of contemporaries. Manchester attracted visitors from home and abroad seeking the sights and sounds of a new way of living. Some were appalled, others excited; still others saw in its newness a historical development of epoch-making proportions. It seemed as if all roads led to Manchester, arguably the world’s first modern city.

The core of this excellent book tells this story, a-tale of factories, utilitarian entrepreneurs, Peterloo, and the emergence of a politicised working class, but also of the people and their culture, the development of middle-class suburbs such as Didsbury and Rusholme, the cinemas, music halls, libraries and newspapers.

In this important overview of Manchester’s history Professor Kidd introduces many new interpretations, and challenges several myths about the city’s industrial heritage. Accessibly written yet scholarly, Manchester is the perfect starting point for an exploration of this famous city as it goes from strength to strength into the twenty-first century.

Be the first to review “Manchester: A History” Cancel reply